So back to Leap Year, the June Schnibbles of the month.

This is where I left you on my last Leap Year post, wanting to make this bigger. 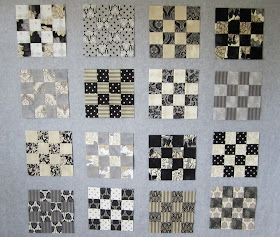 I got several great suggestions that I'm going to pass along just in case sometime you're wanting to make a project bigger; add sashing to the blocks, set the blocks on point, and add some outer borders.  Someone was even nice enough to track down a few more little Black Dress charm packs for me.  All great ideas and very helpful, thanks!

But I didn't go with any of those ideas.  Instead I thought maybe I would like the looks of some blocks that had background fabric in half of the squares, so it would look like some of the fabric was free, and not part of a square. 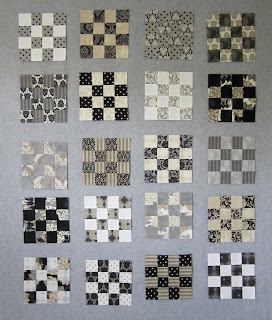 It's hard to tell what a horrible idea that was from this picture. 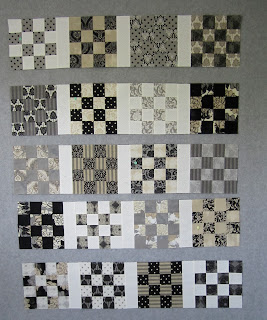 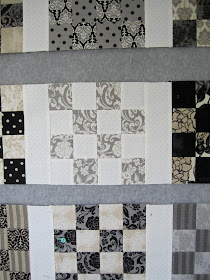 It was at this point that I realized that my favorite thing about this pattern was the 16 patch blocks, and how I liked the blocks to look like blocks, not some squares floating off into space while the majority of the other blocks didn't.  I found those floater blocks distracting.

Then I came up with another idea.  What if I used the light fabric from the family that I hadn't used yet, because it blended in with the sashing fabric, and set it apart by adding a thin black border to each block?

And that's what I did!

And I like it. Not only does it help the blocks with the lighter colored fabric stand out, I think it adds a nice little something something to all the blocks, kind of like they're more dressed up!

So this is where I am now, not done, but definitely back on track.  Good thing too, the parade is just days away!