As I mentioned in my earlier posts, I wanted my Leap Year to be just a little bigger.

So step one, I added more blocks and a little black trim to all the blocks.

To make this project even bigger I decided I would add a couple of black borders and 3 background borders.

So to start, I made my inner border the same width as the sashing . 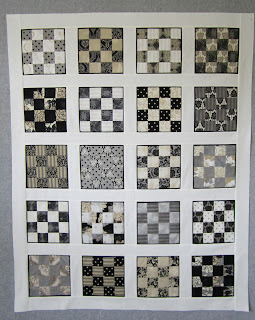 Then I added this thinnish black border, 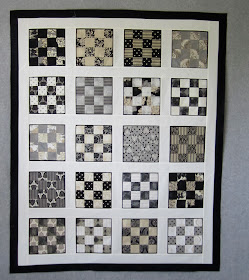 with the intention of adding an even thinner background border, another thinnish black border, and wrap the whole project up by adding a wide outer border using the background fabric.  So it was at about this stage when I figured out I was taking away from the center of my quilt by adding all those borders.  Borders whose only purpose was to make the quilt bigger.

I also decided I really liked how the pattern had a wider border around those outer blocks, it set them off more.

So off came the first two borders and on came the wider border. 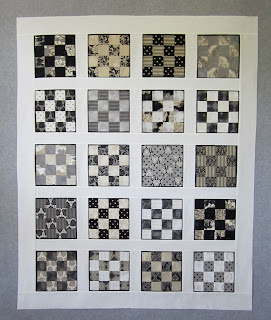 Isn't it amazing what a difference less than an inch makes!

Then to finish things off I added one last black border, not thin, not thinnish, but just right.

Sometimes a quilt needs to be its size, not the size you want it to be. 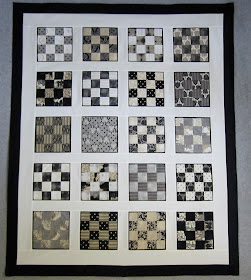 I've name my project Date Night, because once I jazzed up that little black dress fabric that's what popped into mind, like the fabric was all dressed up to go out.

This is Lifetime Quilt Number 90!
It finished at 43" x 53"
It has approximately 427 pieces.
The pattern is Leap Year by Miss Rosie's Quilt Co
The print fabric is little Black Dress by basicgrey for Moda
The background fabric is American Jane Patterns by Sandy Klop for Moda.

The black flange was cut 1 1/4" wide then folded in half and pressed before adding it to each block.

I've not seen the usual number of finished projects out in blogland for this project as I've seen in past months.  I sure hope we have a good parade.  If you've not started yours, and you stick with the pattern, and don't change your mind 5 times about the border, you can have this done in a day, I swear!